Steve "Paps" and Susan Edwards moved to the North Carolina mountains from Augusta, Georgia and purchased the Buffalo Tavern in 2018.  After a long career as a paramedic, Paps is doing what he loves best...cooking and serving people.  While Paps is busy running the Tavern, Susan is teaching 7th grade math at Johnson County Middle School.
​Let us know how we can serve you and we will do our best to make your stay in the mountains pleasant and comfortable.  We want the Buffalo Tavern to be your relaxation destination. 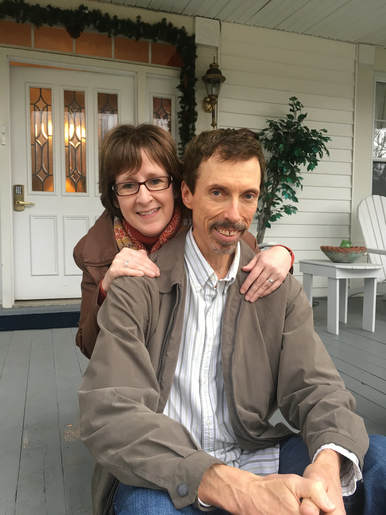 We truly live the mission of the Buffalo Tavern Bed and Breakfast to ensure that all who come here
​arrive as our guests, and leave as our friends.
As a landmark from the days when horse-drawn wagons traveled the roads of Ashe County , North Carolina , there still stands in the Buffalo Community a special place called the Buffalo Tavern, circa 1872.  Today, it's an inviting Bed and Breakfast for guests to call "home" while they enjoy the many activities of North Carolina 's High Country. It's also a place where guests can choose to do nothing at all.

The Buffalo Tavern was built in 1872 by George Washington Ray for use as a residence. He built it on 500 acres of land that he had purchased from the state of North Carolina in 1851 for five cents an acre. The house was built with timber that was cut from the 500 acres. Bricks used in the house were handmade on the site and the native stones used were also found on the property. It was the first house in Ashe County to have glass windows.  Many of those same old windows are preserved in a greenhouse-type building sitting at the rear of the property today.

The house has seven fireplaces and two staircases, the back one is said to be the staircase used by the servants. George Washington Ray, who was a talented craftsman, did most of the woodwork. A striking example of his work is a champagne glass which is carved out of the top of the newel post at the formal staircase upon entrance to the Tavern.

In the late 1800's, Buffalo Road was part of a major artery of highways from Tennessee to Jefferson and beyond. At that time, the Ray family began operating their home as a tavern. Bedrooms in the house served as rooms for guests. In later years, cottages and a pond were added behind the house for early tourists in the mountains.

It is said that two early governors of North Carolina were guests at the Buffalo Tavern. Their identities are not known, but possibly one of them was Zebulon Vance. In their honor, the room on the first floor is named "The Governor's Room."
​
A large grape vineyard and cornfields provided wine and corn liquor for Tavern customers. The Tavern somehow managed to continue alcohol sales through the prohibition of the 1920's. Could there have been a special agreement between the Rays and local sheriffs? With the depression era came the closing of the tavern.
Read more about the history of the Buffalo Tavern in this online book.
Buffalo Tavern / 958 West Buffalo Rd., West Jefferson, NC 28694 / (828) 278-7394 / Open Year Round